The Motion Collective
Unstuck In Time 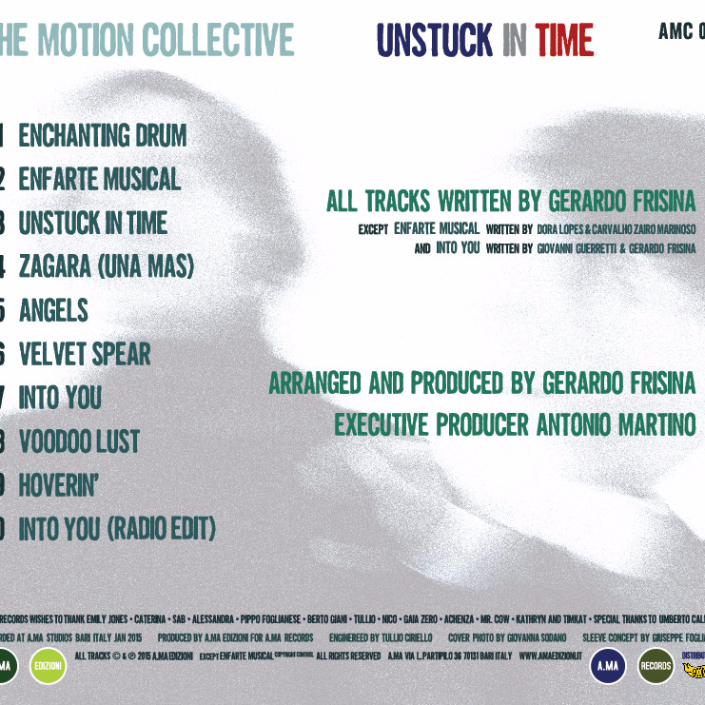 “Unstuck In Time” is the new recording by the Motion Collective for A.MA Records, written, arranged and produced by Gerardo Frisina, after the debut EP “Burak” released in 2014, of which it is the natural continuation, enhancing the original inspiration. There are varied moods, drawing from different musical styles to blend a single sound message where love for music of the past mingles with electronics, to recreate itself in a modern idiom.

Unstuck in Time is indeed the meaning of this record. Just as Bill Pilgrim, the protagonist of Kurt Vonnegut’s beautiful book “Slaughterhouse-Five”, moves back and forth in time, in the same way the compositions of Gerardo Frisina are the summary of a profound reflection on music, which moves expertly among all musical genres to create a perfect distillate with a unique and distinctive flavour.

Gerardo skilfully directs a capable group of musicians that not only fulfills his ideas but also instils the music with each musician’s own artistic sensitivity. In this journey through time on the planets of Soul, Jazz, Latin Music, psychedelia and electronics, the foundation is rhythm. Rhythm is what distinguishes all of the music of Gerardo Frisina, since the beginning of his recording and producing career, and this new work is no exception.

“Velvet Spear”, “ Enfarte Musical” and “Zagara (Una Mas)” find their inspiration within the Brazilian sound-world without any of the of the obvious clichés of that genre, moving forward enriched, followed by the soulful “Into You” and the sensual and dreaming mood of “Unstuck In Time”, through the psychedelic and voodoo flavour of “Enchanting Drum” and “Voodoo Lust” to reach tomorrow with “Angels “ and “Hoverin’”, where the electronic adventure finds its full realization.

All we can do is to jump aboard the time machine and start the journey together with The Motion Collective.